Well, it is not really news because wolves are back in Germany since several years. But what’s new is that wolves start spreading all over Germany. Three weeks ago I heard that a wolf was seen near the village where I was born (hurray!). And last week a wolf was hit (and killed 🙁 ) by a car on the Autobahn, just 20 minutes from where we are living right now. 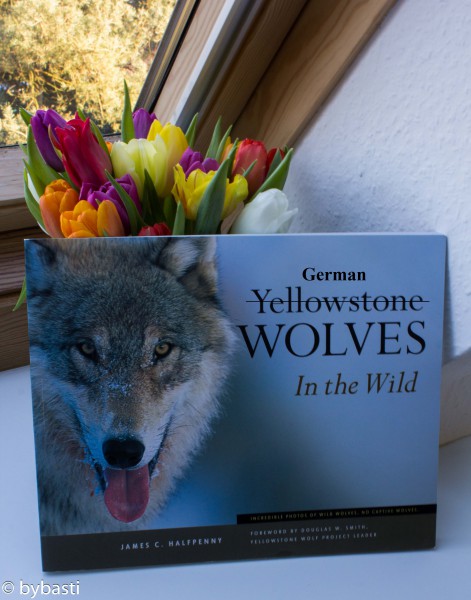 I personally like wolves and would love to see one in nature.

But unfortunately there are also many people who don’t like that these animals are back. I sometimes hear interviews in the local radio about what people think about the German wolf. And in some cases I can’t believe that many people still have prejudices against wolves. Fact one: It is really (!) unlikely to see one in the wild, since they avoid to meet humans. Fact two: There is no need to be afraid! Humans are normally not on the wolves menu. In Germany it’s more likely to be attacked by a boar.

There are many discussions going on, with people stating their thoughts. Sometimes I am horrified, for example when I heard an angry hunter on the radio. He mentioned that deer are scared of wolves and don’t stand around in open grassland anymore when there are wolves around. So what? I guess the only problem he has is that he needs to move a little bit more now to find the deer.

As I already said: I’m happy that they are back. Hopefully they will stay and find their places to live! You might also read Annas post about wolf haven if you like. And by the way: When we visited Yellowstone National Park we tried to see wolves. We even knew where to look, and still were not lucky. What I want to tell you with that: Even when actually trying to encounter a wolf in the wild, it’s quite a challenge, even when knowing where to watch.

Have a good start into the new week 🙂 .